The Australian Aeromodelling Team of Bruce and Linda deChastel have won Gold in the F3T Aeromodelling Semi Scale Pylon Race at the World Air Games in Dubai.

“This is the peak,” declared Bruce de Chastel as he fought back tears after clinching the FAI World Air Games title in  final. “I didn’t even dare to dream about this. It’s too much.” De Chastel, partnered by his wife Linda, who helped at take off and called out turn times through the race, said he was surprised to have made the final. He had planned to fly a steady race hoping for third place. 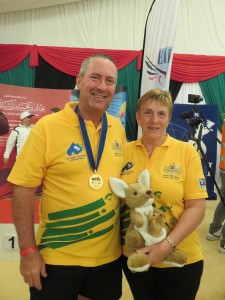